Get Admission in VSA Course by Mr. Sajid Ghori

As per FXF promised, we brought this opportunity for all forex traders to learn VSA by Mr. Sajid Ghori and get him as your personal instructor. 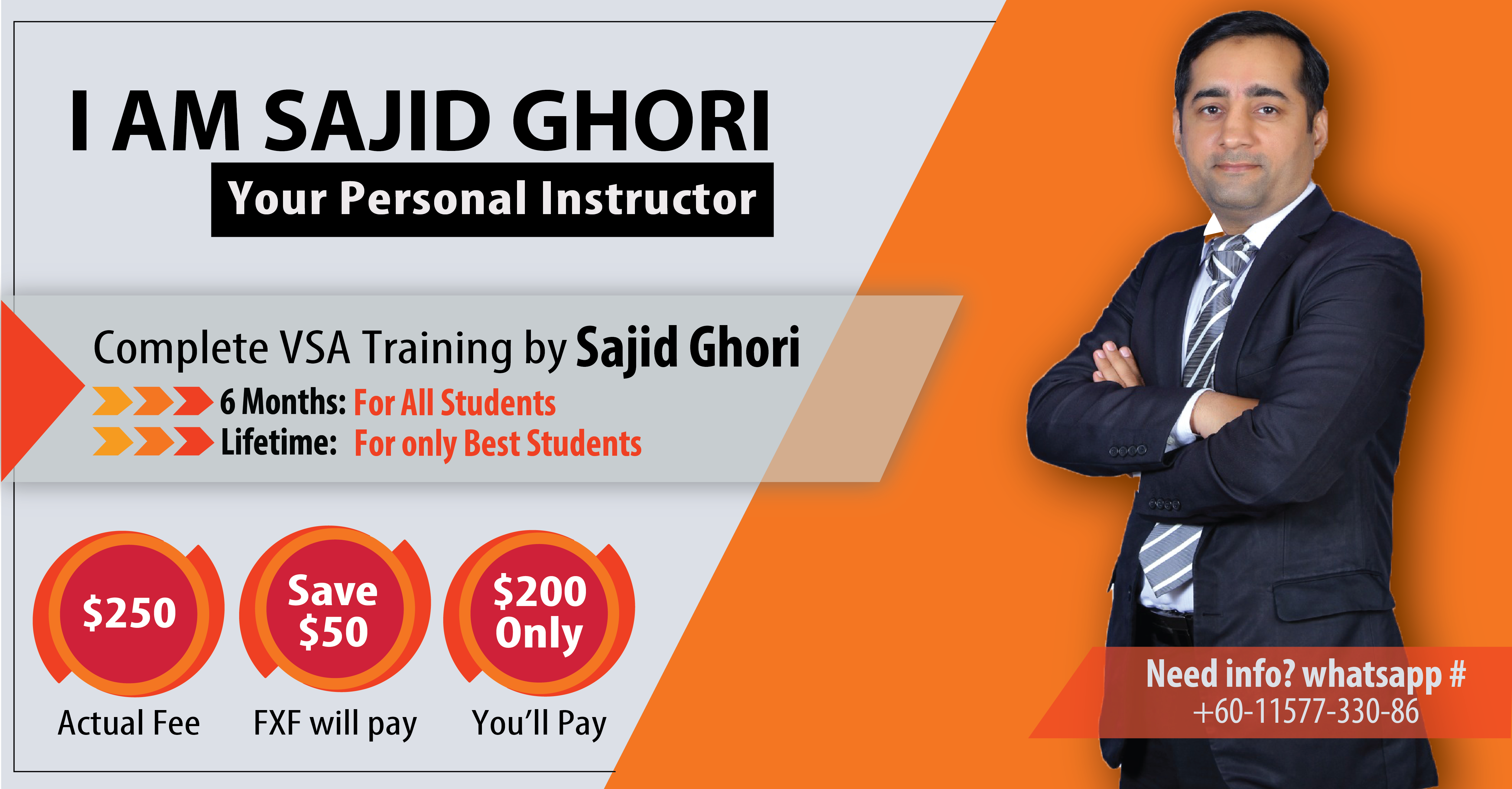 There are a few levels of VSA course:

In this level, you’ll be taught the intermediate level stuff of VSA.

This is the Advance level of VSA, you may almost become an expert here.

In this last VSA expert level, you’ll feel yourself as a Pro Forex Trader, Pro Signal Provider, Pro Market Analyser and a Professional VSA Trader.
Last 3 months, you’ll be only practicing on Live Forex Market Charts and we hope you’ll be love to work with FXF as a Partner.

VSA is probably the oldest & the strongest method to trade any kind of market successfully. All other methods are either working with lagging indicators (market moves first & indicator tells you later) or just Price Action Patterns, which are just drawing patterns & fails often; when they fail, traders have no clue about the reason for failure.

VSA deals with the dynamics of Supply & Demand in any type of market. This is the known fact that price moves when there is imbalance created in Supply & Demand. VSA clearly identifies this imbalance so the trader can spot the move before it happens & maximize his/her profits.

The first discovery in Volume studies was made by a book “The Game in Wall Street” by Hoyle in 1898 (can be downloaded easily from Google, its copyrights free as over 100 years passed). In this book, Hoyle explained the first time that markets are manipulated most of the time by big operators & how they target small traders, and by interpreting volume information how a small trader saves himself/herself from loss & can go with them to make profits. This was the first raw form of VSA. Although this discovery was made 118 years ago theoretically we can say that markets are manipulated since they emerged about 350 years ago.

Later in the early 20th century a trader “Jesse Livermore” improved Hoyle methods which were further improved by a trader “Richard D Wyckoff”. He organized the Hoyle & Jesse Livermore methods in a more practical way & applied in live markets. Wyckoff was a legendary trader who once presented his trading journal which showed a total of 483 trades with only 23 looser (a 94% winning ratio). Wyckoff method is still being taught at Golden Gate University, San Francisco, USA.

A Syndicate trader “Tom Williams” learned & got command on Wyckoff method & made himself a multi-millionaire by trading stocks in just 12 years at the age of 40. When the computer got involved in trading & currency markets emerged, he developed VSA from the Wyckoff method which is a granulated form of Wyckoff method. VSA works in every time frame, every asset class & every type of market whether its trade digitally or not, which makes it the most powerful & profitable method to trade any kind of market so far.

All the expert around the world agree that VOLUME is only leading indicator in the world of Investing & Trading that’s why London Stocks Exchange holds Volume information up to 36 hours (they are not concerned about thousands of lagging indicators out there) because they know that if they release true volume information in time then retail traders (who know how to use volume effectively) can beat them in their own game. That is proof that volume is an essential part of correct analysis & successful trading.

The best feature of VSA (which makes it ahead of all other methods) is its smaller stop losses & its application in any time frame from 1 minute to 1 month, unlike Candle Stick patterns & Elliot Wave.